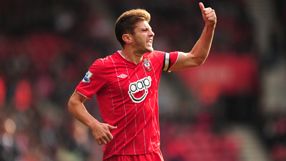 Le Tissier hopes that Lallana will remain with the south coast club having become a key player for Nigel Adkins' side in recent seasons, helping steer the club from League 1 up to the Premier League.

Speaking exclusively to FourFourTwo, he said: "Adam stayed with us throughout League 1 and the Championship, and I think he had offers then to move on but declined them. We’re in the Premier League now, and hopefully he’ll have the same attitude I had when I was at Saints."

Lallana is currently sidelined with a knee problem which may keep him out until February, and his return is hotly anticipated with the Southampton skipper hailed by Le Tissier as the main man he goes to see in action at to St Mary's.

"He’s the player I love to go and watch when I go down to St Mary’s – he gets me on the edge of my seat when he gets the ball. He may not have scored as many goals [this season] as in the lower leagues, but his performances and work rate have been good."

Lallana's form has led to links with Newcastle United, Fulham and Stoke City, but Le Tissier is hopeful that Lallana will stay put at the club he has been with since the start of his career as they battle against relegation from the top flight.

"He’s been an excellent player for us over quite a few years now, so hopefully he’ll stick with us," he said.

Southampton have not won a league game since Lallana limped off the field against fellow strugglers Reading, and Le Tissier stressed the importance of Lallana for the Saints if they are to beat the drop.

"He’s now captain and he felt that was kind of weighing him down a bit with his performances, but I don’t think the other players around him see that, I think they know how important he is to the team, and I think the fact he took a while to get his first goal was a bit on his mind. He’s got a couple now and hopefully he can kick on from there."

Matt Le Tissier was speaking at the opening of Decathlon’s new store in Southampton. As the world’s biggest sports retailer, Decathlon is a gateway to sport and is committed to putting sporting activity back at the heart of the nation’s local communities by making it accessible to all. To find out more about how your grassroots club can benefit go to www.decathlon.co.uk