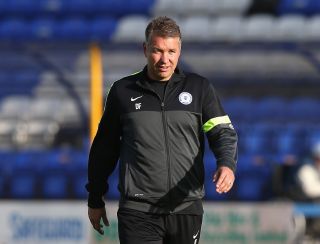 Darren Ferguson's side, who had not won their opening four league games since 1961, were firmly in the driving seat after goals from Tommy Rowe and Tyrone Barnett in the first half.

Tranmere debutant Andrai Jones, on loan from Barnsley, was dismissed for hauling down Barnett in the 37th minute and Grant McCann stepped up to convert the penalty and make it 3-0.

Mark Little and club-record signing Britt Assombalonga, who now has three goals in four appearances, were on hand to add to the hosts' woes after the break.

Leyton Orient also maintained their perfect start to the new campaign with a comfortable 2-0 victory over Crewe Alexandra to stay top on goal difference.

Moses Odubajo opened the scoring after just seven minutes, before David Mooney added a second from the penalty spot eight minutes before half-time.

The 23-year-old put the hosts in front on the stroke of half-time well-struck shot, before sealing the three points from close range in the 87th minute.

Swindon Town were held to a 2-2 draw by strugglers Gillingham after twice taking the lead through Nathan Byrne and Nathan Thompson, before Cody McDonald netted four minutes from  time to share the spoils, with Danny Kedwell also having scored.

Daniel Nardiello came off the bench to score an equaliser for Rotherham United against Shrewsbury Town, before being shown a red card.

The striker, who was making his first appearance of the season following a hamstring injury, headed home midway through the second half to make it 2-2 and extend Rotherham’s unbeaten run to four games.

But Nardiello was shown a second yellow card for dissent, taking the shine off his comeback.

Rooney nodded home a cross from Colombian winger Cristian Montano in the 14th minute to claim his first goal for the club, before the visitors equalised in the 30th minute through Jennison Myrie-William.

But the 25-year-old struck for a second time in the 57th minute with a tap-in after a shot from Jonson Clarke-Harris was blocked, before James Dayton secured the points.

Elsewhere, Clayton Donaldson scored the only goal of the game as Brentford beat Walsall, MK Dons and Bristol City battled to a 2-2 draw, and James Dunne struck late to give Stevenage a 1-0 victory, and their first points of the season, at Notts County.