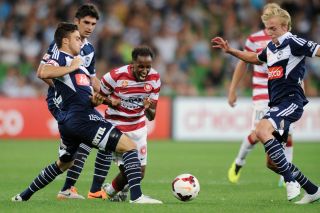 In a game brought forward from February due to a scheduling clash, the Victory - without a host of key players due to injuries, suspensions and international commitments - were rarely troubled by the reigning premiers at AAMI Park.

Second-half goals from Archie Thompson, Kosta Barbarouses and Guilherme Finkler secured a first win in four attempts for the hosts, who are now three points behind the Wanderers and seven adrift of leaders Brisbane Roar.

Western Sydney coach Tony Popovic may regret starting with key men Tomi Juric, Shinji Ono and Youssouf Hersi on the bench after going down to a Victory team who were without captain Mark Milligan, in-demand midfielder Mitch Nichols and marquee centre-back Pablo Contreras, as well as four players away with Australia's Under-22 side.

The hosts made light of their numerous absentees, producing a dominant performance to revive hopes of a top-two finish.

It took 52 minutes for the Victory to move in front, Thompson converting a first-time cross to the back post from Barbarouses.

Wanderers did pull a goal back when substitute Juric got in behind the Victory defence four minutes into injury time, but any hopes of an improbable comeback were swiftly extinguished when Finkler broke up field to prod home his side's third little more than a minute later.