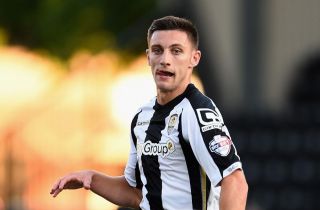 Crewe have been in dreadful form so far this season and came into this fixture having lost seven of their opening nine matches.

That dismal run always appeared likely to continue when Cassidy - on loan from Wolves - fired home a right-footed effort from the centre of the penalty area just before half-time.

Manager Steve Davis recruited experienced defender Alan Tate on loan last week in a bid to shore up his porous defence, but the Swansea City man's first goal for the club came at the wrong end.

Striker Shaun Harrad pulled the trigger inside the Crewe box after the home defence failed to clear their lines from a corner in the 52nd minute, with Tate's deflection diverting the effort beyond goalkeeper Ben Garratt.

Cassidy rounded off the scoring 10 minutes later when he capped off a swift counter-attacking move by tapping home from a squared Stephen McLaughlin ball.

Crewe have now conceded three or more goals in five of their last six home matches.

The result leaves them with four points from 10 matches, while Notts County jump to 10th courtesy of their third win of the campaign.