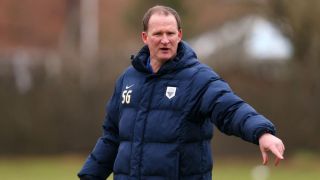 Preston North End could be promoted back to the Championship after a four-year absence in what promises to be a big weekend at both ends of the table in League One.

The Lancashire club, relegated from the second tier in 2011, are a point clear of MK Dons in the race for the second automatic promotion place after both claimed victories in midweek.

Preston head into Saturday's home game against fourth-placed Swindon Town knowing victory will secure promotion with a game to spare if Karl Robinson's side suffer defeat at Rochdale.

Colchester United, Notts County and Leyton Orient could all join Yeovil Town in dropping into League Two this weekend.

County and Orient will be at risk if they suffer defeats to Doncaster and Sheffield United respectively. However, their relegation would only be confirmed if Crewe Alexandra also beat Coventry City and Crawley Town claim at least a draw at Peterborough United.

Colchester, with a game in hand on the teams around them, may fall into the fourth tier with a defeat at Fleetwood Town, but results involving Crewe, Crawley and Port Vale - who travel to relegated Yeovil Town - would have to go against them too.

Champions Bristol City visit a Chesterfield side looking to secure the final play-off spot, while Bradford City will mark the 30th anniversary of the Valley Parade fire when they host Barnsley in their final home game of the season.