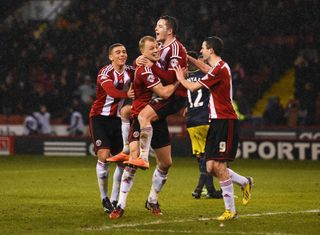 While Nigel Clough's men reached the last four of the League Cup on Tuesday with a 1-0 victory over Southampton, Yeovil secured an FA Cup third-round meeting versus Manchester United courtesy of a 2-0 triumph against Accrington Stanley.

The clubs have very different objectives in the third tier, though, with United - who reached the FA Cup semi-finals last season - chasing promotion and Gary Johnson's side looking to avoid the drop.

Mid-table Walsall make the trip to Bramall Lane on Saturday, with the hosts having gone off the boil in the league, failing to win in their last four games.

Yeovil were sent into dreamland at Huish Park courtesy of two late goals against a plucky Stanley outfit, earning them the reward of a televised third-round clash against Louis van Gaal's top-flight giants next month.

But they are in need of a boost in the league, too, having won just five times in a campaign that has seen them languish at the wrong end table for the most part.

At the top, Swindon Town will look to apply further pressure on leaders Bristol City when they host Doncaster Rovers at the County Ground.

Mark Cooper's side have won their last five league matches – conceding just one goal – to move within a point of the summit after 20 matches.

City will expect to hold onto their lead, though, as they travel to bottom club Crewe Alexandra.

The hosts have failed to win any of their last six games, and find themselves six points from safety going into Saturday's match.

MK Dons lead the pack chasing the top two and they, like the three other play-off sides, have tough tests this weekend.

Gillingham and Scunthorpe United will look to boost their survival hopes with wins against Chesterfield and Bradford City respectively, and Fleetwood Town face Coventry City.