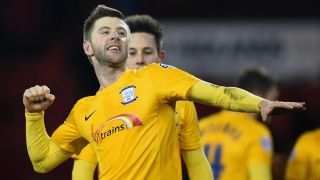 There will be agony or ecstasy at either end of the table when Preston North End travel to Colchester United on the final day of the League One season on Sunday.

North End currently occupy the second automatic promotion spot behind champions Bristol City and will end a four-season absence from the Championship if they can match or better MK Dons' result against already relegated Yeovil Town.

But they will face a highly motivated Colchester side, who are embroiled in a scrap involving six teams to avoid the remaining three relegation spots.

Last Saturday's 3-0 win over fourth-placed Swindon Town extended Preston's unbeaten league run to 18 matches and took them to within touching distance of promotion.

Preston will be keen to avoid joining their previous opponents in the play-offs having fallen short in nine previous post-season campaigns, including last season's semi-final loss to Rotherham United.

"For us to be where we are and what we’ve done is a testament to the players. At this stage of the season to be 18 games unbeaten and have given ourselves the opportunity to be promoted is fantastic, and we're focused and determined to do that."

Colchester begin Sunday in the relegation zone having drawn 1-1 with Swindon on Tuesday night, a game they led through Jacob Murphy’s first-minute strike.

A point would only be enough for United if Notts County lose by four goals at Gillingham. Ricardo Moniz's team are currently only outside of the bottom four on goal difference from Crawley Town, who host a Coventry City team that they will finish above with a victory.

Crawley are only in such dire straits after conceding two goals in the final three minutes to lose 4-3 at Peterborough Town last weekend - a third loss in four for Dean Saunders’ men.

Like Coventry, Crewe Alexandra are on 52 points and cannot be completely sure of safety unless they beat Bradford City at Gresty Road.

Leyton Orient are second bottom with 48 points and will need Colchester, Crawley and Notts County all to fail in their own victory bids even if they manage to overcome Swindon.

Champions Bristol City are guaranteed a party atmosphere when they play host to Walsall at Aston Gate, while Sheffield United and Chesterfield will decide who finishes fifth and sixth at Bramall Lane.