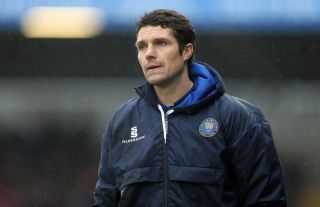 Rock-bottom Stevenage have already dropped through the trapdoor into League Two and a host of teams are vying to avoid joining them in the fourth tier of English football next season.

Of the three sides currently occupying the remaining positions in the bottom four, Shrewsbury Town are at the greatest risk of relegation.

Michael Jackson's men must beat Peterborough United to have any hope of staying up, but they would still need plenty of assistance from elsewhere, given Shrewsbury are currently six points from safety after three successive defeats.

Only Swindon Town can stop Peterborough United claiming the final play-off spot and Darren Ferguson's men will secure sixth place if they match the result of their rivals.

Carlisle United, who host Oldham Athletic on Saturday, cannot go down this weekend as they have a game in hand on their rivals, but victory over Lee Johnson's men could ease the pressure and move them closer to safety.

Shaun Derry's Notts County entertain Swindon at Meadow Lane knowing they will be relegated if they lose and Crewe Alexandra, Tranmere Rovers and Colchester United all win.

County have been inconsistent in recent weeks with two wins and two defeats in their last four matches.

Crewe, who sit just outside the bottom four, travel to Bristol City hoping to put back-to-back away wins together and keep themselves out of the bottom four going into the final round of games.

The other teams under threat face tough challenges against teams in the top five.

Preston North End and Rotherham United, both already in the play-offs, have home matches against Gillingham and MK Dons.