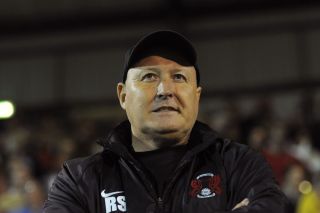 Russell Slade's Orient - who had won all of their opening eight matches - were held to a 1-1 draw by Walsall at the Bescot Stadium on Saturday, as both sides finished the game with 10 men.

Walsall's day started badly when centre-back Andy Butler was given his marching orders in the 18th minute, before David Mooney put Orient ahead with seven minutes of the half remaining.

And the league leaders looked to be cruising towards a ninth win of the campaign, but Craig Westcarr secured a point for the visitors with just under 20 minutes remaining.

The home side were then dealt a further blow when Romain Vincelot was shown a second yellow card and a subsequent red deep into time added on.

Peterborough took advantage of those dropped points as they triumphed with a hard-earned 1-0 victory away to Rotherham United at the New York Stadium.

The South Yorkshire outfit had been on top, but Darren Ferguson's side went ahead through Grant McCann's 50th-minute penalty.

Wolves made it back-to-back League One victories as they strolled to a 2-0 win over lowly Sheffield United at Molineux.

Kenny Jackett's charges were frustrated in the first half, but Leigh Griffiths broke the deadlock in the 66th minute.

And the result was put beyond all doubt when Bakary Sako added a second in injury time. The loss leaves David Weir's side propping up the league table.

In other matches, Notts County and Tranmere Rovers' poor starts to the campaign continued. The former were beaten 2-1 by Carlisle United at Brunton Park, while the latter succumbed to a 1-0 home defeat to Port Vale at Prenton Park.

Sam Baldock secured Bristol City a 1-1 draw with Colchester United at Ashton Gate after Matthew Taylor's opener, while a double from Patrick Bamford helped MK Dons to a 4-1 rout over Stevenage at Stadium MK.

Preston North End continued their early-season form with a 2-1 triumph over Swindon Town at Deepdale.

Iain Hume put Simon Grayson's men ahead in the first half, before a Jay McEveley own goal doubled the advantage shortly after the break.

Dany N'Guessan halved the deficit in the dying stages, but Preston hung on to make it five consecutive league victories.

Elsewhere, a James Hanson strike deep into injury time saw Bradford City come from behind to beat Shrewsbury Town 2-1 at Valley Parade, Joe Walsh scored the only goal of the game as Crawley Town defeated Oldham Athletic 1-0, and Crewe Alexandra were humbled 3-0 at home by Gillingham.