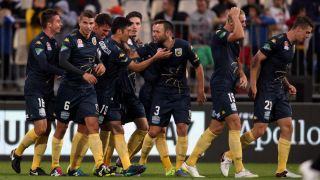 Former Liverpool player Garcia signed for rock-bottom Central Coast earlier this month and, after making his debut in a defeat to Western Sydney Wanderers, came off the bench to help the Mariners record their first win of 2016.

Following a goalless first half, Garcia was introduced at the break and opened his account for the club with a cheeky backheel before assisting Roux's first goal in over two years within eight minutes of the restart.

Mitchell Austin added a late third to secure the Mariners a first away win of the campaign, with Blake Powell's stoppage-time consolation unable to prevent Phoenix suffering a defeat their manager Ernie Merrick labelled "soul destroying".

Perth Glory gave their finals hopes a boost with a thrilling 3-2 win over 10-man Melbourne Victory in the final game of the day.

Goals from Andy Keogh and Diego Castro gave the hosts a two-goal cushion inside half an hour at nib Stadium but Besart Berisha's brace - either side of Fahid Ben Khalfallah's red card - levelled matters.

Despite levelling with 10 men, Victory fell behind when Keogh was fouled in the area as Castro sealed the points with a Panenka penalty eight minutes from time.

City were on the wrong end of a seven-goal thriller involving leaders Western Sydney Wanderers on Friday and Roar took full advantage thanks to Jamie MacLaren's brace on his return from Australia Under-23 duty.