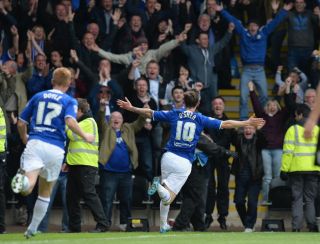 Fleetwood Town's 1-1 home draw against Southend United on Saturday gave Chesterfield the chance to book their place in the third tier of English football and they did not waste their opportunity.

Chesterfield dominated the first half, with O'Shea already emerging as a threat, but Paul Cook's men were wasteful in front of goal.

Sam Hird nodded Danny Gardner's cross into the bar just before the break but it took them just seven second-half minutes to take the lead.

Ritchie Humphreys set up the goal, playing O'Shea through, who slotted past Burton goalkeeper Dean Lyness in style.

Gary Roberts fired a free-kick just wide as Chesterfield searched for a second goal, one that came with 11 minutes left.

O'Shea was again on hand to knock Eoin Doyle's low cross past Lyness and delight the travelling fans.

Chesterfield – who were relegated from League One in 2012 – now sit on top of the league with 81 points.

And they can win the League Two title if they beat Fleetwood Town on Saturday.