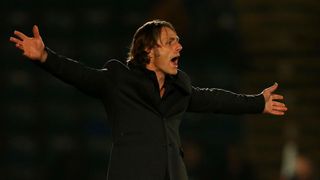 Three draws on the bounce have seen Shrewsbury Town and Burton Albion jump above Wycombe at the league's summit, with Gareth Ainsworth's men now a point adrift of their promotion rivals.

This weekend's hosts Cambridge, meanwhile, suffered a 3-0 defeat in their FA Cup fourth-round replay at Manchester United on Tuesday.

While Ainsworth is satisfied with his side's performance so far this season, he has issued them with a challenge to carry the same levels through to the end of the campaign.

"We've pretty much reached the points total we first set out to reach which should ensure our safety in the division," he told the club's website.

"Now the challenge to the players is to go out there and see what they can achieve by sticking to their tasks and continuing to work hard for each other."

Leaders Shrewsbury host fellow high-flyers Southend United in a clash between two sides on three-match winning runs, while Burton are on the road at Cheltenham Town, who signed striker Mathieu Manset on a free transfer on Monday.

Newport County's position in the play-offs is looking increasingly perilous after a run of three straight losses, and speculation surrounding the future of manager Justin Edinburgh will do little to aid their cause.

Edinburgh is reportedly wanted by Gillingham, but the League One outfit are said to be put off by the potential size of the compensation fee.

Newport are at AFC Wimbledon on Saturday, while fellow play-off hopefuls Luton Town and Bury take on Oxford United and Exeter City respectively.

At the other end of the table, Hartlepool United - seven points adrift of safety - will be looking to build on their win against Plymouth Argyle last time out as they head to Portsmouth.

Mansfield Town host Stevenage and York City are at home to Dagenham and Redbridge.