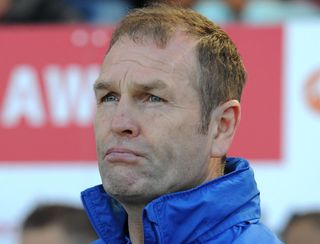 The League Two strugglers, who reached the play-offs last season, have won just once this term and sit only one point ahead of rock-bottom Tranmere Rovers.

Wilcox, appointed last week to replace Nigel Worthington following his resignation, led Scunthorpe United to promotion from the fourth tier last term, but lost his job after a slow start to the current campaign.

He began his tenure at Bootham Crescent with a 1-0 loss to Shrewsbury Town on Saturday, but Wilcox has promised that results - and the team's style - will improve.

"It's important to pass the ball because I think League Two has changed," Wilcox is quoted as saying in the Yorkshire Post.

"You have to try and keep supporters happy because they pay good money and we've got to entertain more.

"I know there is quality in this group of players but it's impossible to change mindsets in a few days.

"It might take time and a couple of new players."

Morecambe sit sixth and won 2-0 at high-flying Burton Albion on Saturday, making them heavy favourites for the clash.

Tranmere started life under new boss Micky Adams with a 2-0 reverse at fellow strugglers Oxford United at the weekend.

A home fixture against Mansfield Town on is Adams' next challenge and Rovers need the points, having taken just nine from 13 games.

Surprisingly, one of Tranmere's two wins this season came against League Two leaders Wycombe Wanderers - their only loss of the campaign.

Wycombe top the table by two points and beat AFC Wimbledon 2-0 last time out, giving them added confidence ahead of their trip to Exeter City.

Bury lie second and go to Shrewsbury, while in-form Luton Town will go in search of their sixth straight league win at home to Dagenham and Redbridge.

Other sides in the play-off places - Burton and Plymouth Argyle - battle Carlisle United and Wimbledon respectively.

Portsmouth, who have not won in six - form that has seen them drop to 14th - host Stevenage, while Hartlepool United, who have only managed eight goals this season, head to Accrington Stanley.