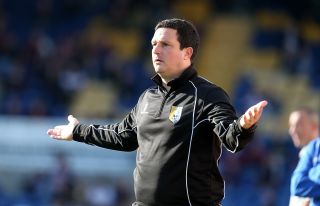 Calvin Andrew's goal after 37 minutes was enough to inflict defeat on Paul Cook's men for the first time in the league this season as Oxford United closed the gap between the top two to four points.

Chris Wilder's side were beaten by Chesterfield last time out but they bounced back against Hartlepool United to take full advantage of the leaders' slip-up, winning 3-1.

Ryan Williams gave the visitors the lead at Victoria Park after just five minutes before Luke James levelled matters three minutes into the second half.

However, Dean Smalley nudged Oxford back in front before Asa Hall wrapped up the three points in the last minute from the penalty spot.

Wilder will have been pleased further by the news from Highbury, where Fleetwood Town were beaten 2-1 by Exeter City.

All three goals came in the last 20 minutes, with Matty Blair scoring for the hosts before a Scott Bennett double denied Graham Alexander's men a fourth straight win.

Rochdale were able to make it four wins on the bounce, however, as they won by the odd goal in five against Wycombe Wanderers having been three goals ahead after just 15 minutes.

York City and Portsmouth played out the highest scoring match of the day, with Nigel Worthington's men winning through 4-2.

The hosts had only scored six goals in their previous eight league matches but found their shooting boots on Saturday as Portsmouth slipped to consecutive defeats.

Bury are now winless in four games, going down 2-1 against Dagenham and Redbridge, while Torquay United lost by the same score line against Newport County.

Goals in the opening 36 minutes from Ismail Yakubu and Danny Crow ensured Newport have now lost just once in the last five league matches.

Burton Albion and Scunthorpe United remain separated by just two points after they drew 2-2 at the Pirelli Stadium.

Billy Kee and Robbie Weir were on target for the hosts, while Deon Burton and Niall Canavan scored for Scunthorpe.