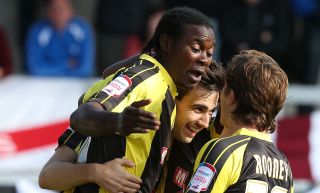 Striker Adam McGurk was the hero for the visitors, the 24-year-old scoring a double to ensure the points for Gary Rowett's men.

It was not enough to see them knocked off the top, but Rochdale are now level on points with Chesterfield after they came from behind to beat Cheltenham Town 2-1.

Ian Henderson's 93rd-minute strike secured victory for the visitors, the forward scoring the winner just eight minutes after he had cancelled out defender Troy Brown's opener.

Exeter City are also joint top following their 4-0 hammering of Scunthorpe United, with midfielder Liam Sercombe netting a brace for Paul Tisdale's side.

Struggling Northampton Town had to settle for a 2-2 draw with Dagenham and Redbridge, captain Ian Morris earning a share of the spoils after Dagenham had turned things around through strikers Zavon Hines and Rhys Murphy following Luke Norris' debut goal.

York City's three-match unbeaten league run came to an end as they were brushed aside 3-0 by Newport County, while substitute Max Krtezschmar scored eight minutes from time to give Wycombe Wanderers a 1-0 win at Bristol Rovers.

Morecambe's unbeaten streak in the league was extended to nine matches as they drew 1-1 with Wimbledon.

Veteran winger Kevin Ellison put Morecambe in front after eight minutes, but striker Michael Smith struck seven minutes into the second half to secure a point for the visitors.

Portsmouth are now four games without defeat following their 1-0 success over Bury, and Hartlepool United ensured their third consecutive league win as they beat Plymouth Argyle 1-0.