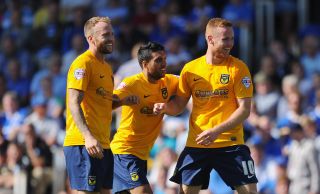 After a goalless first half, Deane Smalley and James Constable put the visitors two goals ahead just after the hour mark.

Jordan Chappell halved the deficit for the hosts with 20 minutes to play, but Asa Hall then secured the three points for Chris Wilder's side.

Phil Brown's Southend are the only other side with a 100 per cent record in the division after their 2-0 victory over Northampton Town.

Grenada striker Anthony Straker opened the scoring at Roots Hall before Freddy Eastwood grabbed his second of the season to seal the win for the home side.

The experienced striker broke the deadlock in the 11th minute before doubling his tally with nine minutes of the first-half to play.

Burton Albion struck three times inside the first half to put them in total control at Highbury against Fleetwood, and they managed to hold out for the win despite a second-half comeback from the home side.

Jeff Hughes and Jamille Matt pulled two goals back for Fleetwood, but Gary Rowett's men kept their noses in front to move up to fifth in the table.

There were also convincing wins for Bury, Portsmouth and Plymouth, as they all found the net on three occasions.

Bury's 3-0 win over Accrington left the visitors bottom of the table and gave Kevin Blackwell's side their first points of the season. Meanwhile, Portsmouth beat Morecambe by the same scoreline at Fratton Park, and Plymouth won 3-1 at Cheltenham.

Rochdale and Chesterfield shared four goals in a 2-2 draw, while Dagenham and Redbridge scored an injury time equaliser to cancel out David Mirfin's 88th-minute strike for Scunthorpe.

The only game in League Two without a goal came at Bootham Crescent as York and Hartlepool battled for a point - Hartlepool's first of the campaign.