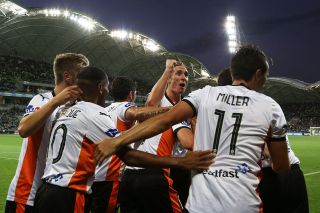 Liam Miller opened the scoring in the first half before Matt McKay finished off a neat team move and Dimitri Petratos thumped home from 20 yards for the league leaders.

Adrian Leijer was dismissed late on as the Victory slumped to their first defeat in four games and first loss to Brisbane at home in eight.

Brisbane have now won six of their last seven A-League games and sit seven points clear of Western Sydney Wanderers at the top.

Elsewhere on Saturday, Perth Glory boosted their top-six hopes with a 1-0 win at the Newcastle Jets.

The Jets dominated the first half, but were unable to break the deadlock as Perth goalkeeper Danny Vukovic turned in an impressive performance.

And Perth striker Chris Harold pounced on a loose backpass from Jets defender Jacob Pepper to grab a vital goal, which moved his side up to seventh, just two points off Newcastle.