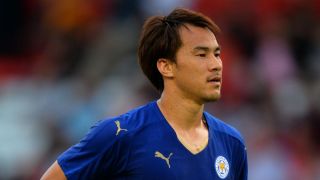 David Cotterill's smashed free-kick and another eye-catching strike from England youth international Demarai Gray had Leicester two goals behind at the break and staring down the barrel of defeat.

Leicester's route back into the game came from an unlikely source as Robert Huth found himself best-placed to prod home Marc Albrighton's flicked corner.

The top-flight side were level with 14 minutes to go as Riyad Mahrez's free-kick rebounded off the post, only for Danny Drinkwater to bundle home, before the Algeria winger provided the perfect cross for a stooping Okazaki to snatch the winner.