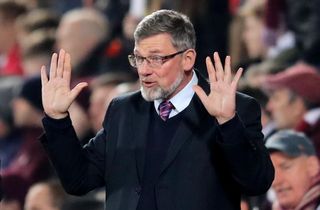 The Jambos boss was barracked by some disgruntled fans at Tynecastle in the wake of Saturday’s 2-1 derby loss, a result that moved the visitors above the home side in the Ladbrokes Premiership and made it one win in four for the Gorgie outfit.

However, ahead of the last-four encounter against Championship side Inverness at Hampden Park on Saturday, Levein said: “The cup semi-final in itself is something I am very much looking forward to.

“Of course we would have loved to have won the game going into this match, but I don’t think it will have any bearing on this particular match and I don’t feel under any more pressure than I put myself under because we lost on Saturday.

“There is always part of you that wants to make up for that as quickly as possible, so I am looking forward to it.

“You can always tell in the week leading up to a big match, the players get a little bit excitable, so we will just try to keep their feet on the ground over the next couple of days.”

Indeed, the former Scotland boss is happy to have the expectancy of victory over the Highlanders, which would set up a final clash with either Aberdeen or Celtic.

“Both teams have a degree of pressure,” said Levein, who revealed Uche Ikpeazu and Peter Haring are doubts for the trip to Glasgow.

“We obviously have the lion’s share of that. I prefer that to be honest, I prefer to have the odds in our favour.

“I do really enjoy the build-up to these matches. It brings a focus and more enthusiasm, I think.

“You have 38 league games in the season and the cup, particularly when you get to this stage and the final, it brings added excitement, which is good.”

However,  the Tynecastle boss is taking “not an awful lot” from that encounter, “other than knowing their players and having an idea of what Robbo is going to do.

“This is a new game and it will pan out the way it pans out.”

Striker Ikpeazu and midfielder Haring picked up knee and groin injuries respectively during the Hibs match.

“I’m hopeful that they will be fine.

“I don’t think the injuries are serious, so I would expect them to both be available.

“If either of them doesn’t prove what we expect in the next couple of days then obviously I need to do something different on Saturday.”