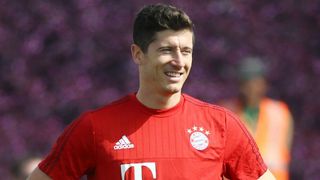 Robert Lewandowski joked that Bayern Munich should change coach every season if it means they win the treble.

After the exit of Jupp Heynckes was announced in 2013, the Bavarian side went on to win the Bundesliga, DFB-Pokal and Champions League.

If Bayern can replicate that feat ahead of Pep Guardiola's impending departure – which was announced in December – at the end of the campaign, the Polish striker playfully suggested that changing coach each season could breed further success.

"We should change coach each season if it would always work like that with winning the treble!" Lewandowski said.

Bayern confirmed Carlo Ancelotti would replace Guardiola for the 2016-17 season, and the 27-year-old admitted he was disappointed to hear of the Spaniard's exit.

However, he insisted the players will continue to give their all for the remainder of the season as they search for glory on all fronts.

"Initially it was not so easy to understand, but you know that you must give everything to the coach who is there. The season is ongoing," Lewandowski said.

"We all want to go together in the same direction and win everything possible. We have to stay focused and if all the players are fit, we have a strong team."