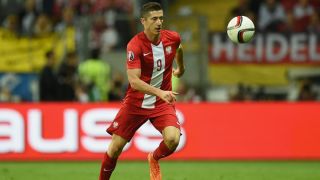 Scotland's Russell Martin says he has rarely come up against an opponent as troublesome as Poland international Robert Lewandowski.

The Norwich defender helped keep the Bayern Munich forward off the scoresheet when their two nations met in a 2-2 Euro 2016 qualifiying draw in October 2014.

They will meet in the reverse fixture at Hampden Park on Thursday, with Lewandowski enjoying a sensational run of form that has seen him score 12 goals in his last four club matches.

However, Martin is relishing the prospect of taking on the in-form Pole once again.

"Lewandowski is one of the best I've played against. His goal record speaks for itself with the form he is in at the minute," Martin told Sky Sports.

"He is different but as a defender I always look at a striker's attributes and think where you can affect them and try and influence them throughout the game.

"Players like him, [Thomas] Muller and [Mario] Gotze of Germany, who are in our group, are all among the top five or six in Europe at the moment, so it's up to us to go and stop him.

"We are doing it week in week out in the Premier League and this will be no different."

Scotland cannot qualify automatically for next year's competition in France but a place in the play-offs is still a posibility.

With that in mind, Martin knows Gordon Strachan's men cannot afford to drop points on Thursday.

"We have to go and win the game on Thursday, it's as simple as that," he added.

"They are a good side but we have done well against them previously, twice, not too long ago.

"Looking back at the games against Georgia and Germany, they're gone now. It's all about the present and making sure we go into Thursday knowing exactly what we want to do and get what we want from the game."