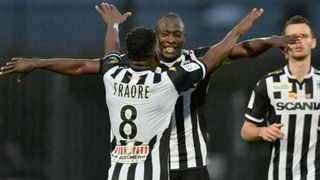 Captain Cheikh N'Doye netted a brace as Angers closed the gap on Monaco in the battle for second place in Ligue 1 with a dominant 3-0 win over their rivals.

N'Doye was on target from close range twice before half-time before Mohamed Yattara, a loan signing from Standard Liege this month, opened his Angers account 10 minutes into the second half to seal the points.

The win ends a run of three consecutive defeats in all competitions for Stephane Moulin's side, who were thrashed 5-1 by runaway leaders Paris Saint-Germain last week, and moves them to within two points of second-placed Monaco.

Frederic Hantz got off to an ideal start as Montpellier coach, masterminding a 4-0 triumph at fellow strugglers Gazalec Ajaccio.

Mustapha Yatabare latched on to Ryan Boudebouz's long ball to open the scoring after 14 minutes and Jonas Martin converted a 41st-minute penalty.

Bryan Dabo won the spot kick and went on to net a second-half double, lifting Montpellier out of the bottom three - where they are replaced by Reims, 2-0 losers at Lorient due to a two-goal haul from Zargo Toure.

Lyon's miserable campaign continued as Brandao scored to give Bastia a 1-0 win over the seven-time champions, who have won just once in their past 10 Ligue matches.

Guingamp and Nantes were both winners in their respective matches against the division's bottom two sides, Toulouse and Troyes.