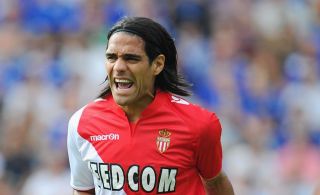 The Colombia international missed the second half of last season after suffering a serious knee injury in January, which also denied him the chance to play at the World Cup.

Falcao had come off the bench to find the target in Monaco's 2-1 defeat to Lorient in their opening match of the season, and the 28-year-old doubled his tally for the campaign, playing 69 minutes as Monaco got off the mark at the third time of asking.

It could have been a different story for Leonardo Jardim's side had Serge Gakpe not seen a penalty saved by Danijel Subasic midway through the first half, after the goalkeeper had brought down Yacine Bammou.

Falcao punished the hosts on the stroke of half-time, meeting Layvin Kurzawa's delicious left-wing cross with a powerful diving header that had too much for Nantes keeper Maxime Dupe.

The home side pressed hard for an equaliser in the closing stages, but Subasic's goal survived the siege as Monaco wrapped up three valuable points.

Like Monaco, newcomers Lens got their first points of the campaign thanks to a surprise 1-0 win at Lyon.

Antoine Kombouare's men had suffered 1-0 defeats to Nantes and Guingamp in their opening two league encounters, but this time it was their turn to enjoy a narrow victory.

Lalaina Nomenjanahary was the hero, the Malagasy claiming the only goal of the game in the 11th minute as the new boys celebrated an unexpected triumph.

In Sunday's other game, Saint-Etienne maintained their unbeaten record with a 0-0 draw at home to Rennes.

However, it could have been so much better for the hosts had Mevlut Erdinc not missed a 41st-minute penalty.