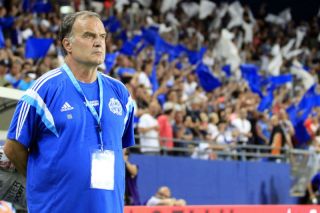 Jardim replaced Claudio Ranieri at Monaco in June after an eye-catching spell in charge of Sporting in Portugal, but his reign at Stade Louis II has got off to an underwhelming start.

Monaco were beaten by 2-1 at home by Lorient in their curtain-raiser last week - and things got even worse at Bordeaux on Sunday.

Despite taking the lead through Dimitar Berbatov just before the break, Jardim's side were beaten 4-1 at Stade Jacques Chaban-Delmas.

Diego Rolan netted twice and a pair of penalties - one each from Emiliano Sala and Wahbi Khazri - consigned last season's Ligue 1 runners-up to a second defeat in a row, and lifted Bordeaux to joint top of the table.

Marseille fared slightly better than Monaco on matchday one - drawing 3-3 at Bastia - but they also slipped to a disappointing loss on Sunday.

Montpellier won 2-0 at the Stade Velodrome thanks to goals in each half from Anthony Mounier and Morgan Sanson - with the home faithful letting their displeasure be known at full-time.

The day's other fixture saw Saint-Etienne come from behind to beat Reims 3-1 at home and join Bordeaux as the only other team with a 100 per cent record in the league this season.

Lois Perrin's 27th-minute own goal gave the visitors a first-half lead, but the host fought back in the final half hour.

Max Gradel struck with an hour gone to restore parity and Kevin Monnet-Paquet's goal 10 minutes later saw Saint-Etienne edge themselves into the lead.

Mevlut Erding then found the net in the final stages to seal all three points for the hosts.