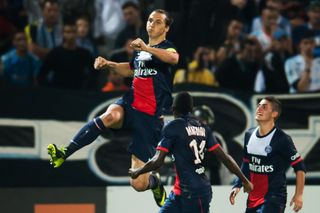 PSG fell behind 11 minutes before half-time in the game known as 'Le Classique', Andre Ayew converting from the penalty spot after Thiago Motta had been sent off for a rash challenge on Mathieu Valbuena inside the area.

Marseille were never able to make full use of the extra man and paid the price midway through the second half when Ayew tripped Marquinhos to concede a penalty.

Ibrahimovic made no mistake from 12 yards, calmly slotting the ball into the bottom-right corner to seal PSG's first win at Stade Velodrome since 2008.

Montpellier ended a run of five draws in a row as they hammered Lyon 5-1 at the Stade de la Mosson.

Striker Victor Hugo Montano gave the hosts the lead after 16 minutes before winger Anthony Mounier doubled Montpellier's advantage with a header just before the break.

Alexandre Lacazette reduced the arrears for Lyon two minutes into the second half, but a double from attacking midfielder Remy Cabella - the first coming from the penalty spot - put Montpellier in control and Montano duly wrapped things up with his second. Maxime Gonalons was sent off for the visitors late on.

Bordeaux clinched their first win in six league matches with a 4-1 rout of Sochaux.

Sochaux, managed by caretaker boss Omar Daf for the second straight game, went ahead through forward Roy Contout, only for Henri Saivet to level with a penalty after goalkeeper Simon Pouplin felled striker Cheick Diabate.

Brazilian attacker Jussie put Bordeaux in front six minutes before the break and the points were secured late in the second half as Diabate struck twice.