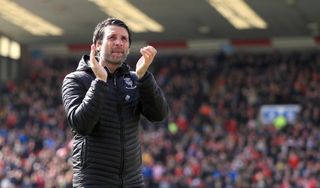 Lincoln have been promoted to League One despite being held to a 1-1 draw by Cheltenham at Sincil Bank.

Robins substitute George Lloyd netted a second-half header to cancel out Shay McCartan’s opener but, with both Mansfield and MK Dons also failing to win, the Imps were promoted to the third tier for the first time in 20 years.

A drab opening came to life in the 18th minute when McCartan pounced on a loose ball 30 yards from goal and saw his bouncing effort fly over the despairing dive of Scott Flinders.

At the other end, meanwhile, Rakish Bingham had the Robins’ best chance of the half on the break but Neal Eardley got back in time to block his effort.

Eardley then curled a free-kick just over before Will Boyle thwarted John Akinde with a timely block as the Imps pushed for a second.

A tense second half saw Chris Hussey spurn a late chance at the far post for the visitors, while Akinde and Danny Rowe both went close to finding a winner for Danny Cowley’s Lincoln.