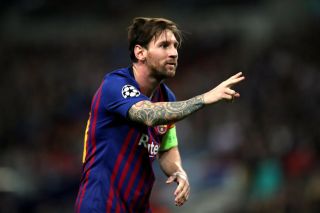 According to Marca, Messi's clause enables him to decide his future this year and would allow him to negotiate with clubs in January.

Messi himself is reported to have inserted the clause, as he wanted to assess his physical state when he reached the current season.

It's understood that the Argentine is in no hurry to make a decision and will take his time to consider all options.

To the observer, Messi isn't showing signs of slowing down - he managed 51 goals and 22 assists in all competitions last season.

Barcelona find themselves between a rock and a hard place regarding contract talks with one of football's all-time greats.

It's believed that they know pushing for an extension before January will appear as though they are distrusting of their talismanic captain, but leaving it too late may see the 32-year-old wooed by a new adventure.

Barça president Josep Maria Bartomeu is relaxed about the situation, however.

"It's something that other players like Xavi, [Andres] Iniesta and [Carles] Puyol have had in their contracts," he told Marca.

"But I'm relaxed, Leo is so [loyal to] Barcelona that he's not going to play for another club and it will stay that way beyond 2021 when his contract expires."