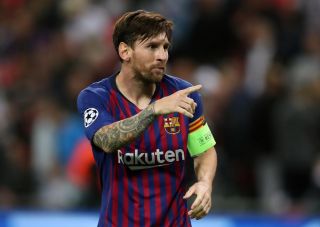 Lionel Messi insists his commitment to Barcelona is unshaken by recent events off the field.

It has been a turbulent season at Barca, who trail LaLiga leaders Real Madrid by a point, with a recent coaching change sparking an angry exchange between Messi and director of football Eric Abidal.

That was followed by allegations Barca hired a social media firm to criticise key figures associated with the club in a bid to protect president Josep Maria Bartomeu’s reputation.

Bartomeu denies the claim but Messi said he could “see weird things happening” at the club in a pre-released extract from an interview with Catalan sports publication Mundo Deportivo.

But in the full interview published on Thursday, the Argentina captain vowed he is going nowhere – despite the reported existence of a clause in his contract allowing him to leave for nothing this summer.

“I have said many times that my idea is (to stay) and as long as the club continue to want that, there will never be a problem,” the 32-year-old said.

“I want to win another Champions League, I want to continue winning LaLiga and I always aspire to that.

“I have always had the choice, there were many interested clubs willing to pay the release clause, but it never occurred to me to leave and does not now either. I love Barcelona, this is my home.”

Abidal was critical of the Barca squad after Ernesto Valverde was sacked, accusing them of not working hard enough for the former coach.

Messi, who was close to Valverde, said: “I don’t know what happened to make him say that but I responded because I felt attacked. I felt he was attacking the players.

“Too much is said about the dressing room, that we force coaching changes or bring in players, and especially about me – like I have a lot of power and make the decisions. The same happened to me in the Argentine national team.

“It bothered me coming from someone from the club… to put the players in the middle of the dismissal of the coach seemed crazy. (Abidal) is the one who makes the decisions and has to take charge.”

Quique Setien took over from Valverde and Messi admits Barca must adapt to his style of play, including a return to the more intense pressing favoured by previous coaches Pep Guardiola and Luis Enrique.

“We are going through a process of changing coaches. Each one has his own ideas and little by little we adapt to what he wants,” he said.

“It is true that for many moments in games we play backwards – that makes people nervous because at any moment the opposition can take it away from us and score a goal. There are other things – trying to press after losing the ball, things we had lost a little.

“That is a process and we are assimilating. People are disturbed but it is normal with the changes and because we are not playing well either, but you have to be calm and trust until the end.

“In the Champions League we have to continue growing a lot, because what we have now is not enough to fight for the Champions League. We need to be more reliable, not make the silly mistakes we have made, and not to repeat what happened to us in Rome or Liverpool.

“In the league, both we and Madrid are inconsistent and have dropped a lot of points. In that sense I think we will be fighting to the end and the league does not end after the Clasico, whatever happens.”

Real have suffered from the loss of Cristiano Ronaldo, who left for Juventus in the summer of 2018.

Messi said: “They lost a lot of goals, that was obviously going to happen – but not only goals, Cristiano Ronaldo also gives you many other things.

Asked if he would pass to his long-time rival should they ever play together, Messi joked: “I guess so, in the end yes.”