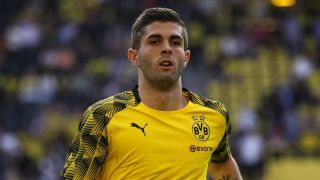 Christian Pulisic scored a brace as Borussia Dortmund came from a goal down to beat Liverpool 3-1 in the International Champions Cup on Sunday.

Jurgen Klopp's side were on track for victory against the German's old club but Pulisic's second-half double helped Dortmund collect another three ICC points after their 1-0 win against Manchester City.

Liverpool dominated the first half and Virgil van Dijk headed Klopp's men into a deserved lead, the defender taking full advantage of an excellent cross from Andrew Robertson.

But although Sheyi Ojo hit the crossbar and Liverpool created plenty of chances to kill the game, Dortmund launched their comeback by equalising with a penalty midway through the second half.

Pulisic was felled by James Milner and Ragnar Klavan at the end of a bamboozling run and the teenager stepped up to convert the spot-kick himself.

And when a Dortmund break opened Liverpool up in the 89th minute, Pulisic rifled the Bundesliga side ahead, before Jacob Larsen added a third in stoppage time.

With new signing Alisson yet to join up with his Liverpool team-mates, Loris Karius was in goal at the Bank of America Stadium in Charlotte.

And the goalkeeper almost produced another costly error, racing from his line to misplace a pass to Maximilian Philipp, who screwed a 40-yard effort wide of an open net.

Philipp wasted another early opening by firing a tame strike straight at Karius before Liverpool were forced into an early change, with defender Joel Matip taken off with a suspected thigh injury.

Matip's defensive partner Van Dijk opened the scoring in the 25th minute, though.

Rafael Camacho took a short corner to Robertson and he delivered a perfect left-wing cross, allowing Van Dijk to rise unmarked and thump home a powerful header from eight yards out.

Marius Wolf drilled at Karius after a strong Mahmoud Dahoud run created an opening on the right side of the Liverpool box.

The impressive Curtis Jones was among eight Liverpool withdrawals at the break, with Naby Keita introduced, while Dortmund also made wholesale changes for the second half.

Milner almost doubled the lead in the 56th minute but the midfielder's 25-yard curler narrowly cleared the crossbar.

Milner's cross was then headed wide by Dominic Solanke as Liverpool, who had been unbeaten in pre-season, continued to push for a decisive second goal.

Ojo should have scored when the lively Daniel Sturridge sent him clear but goalkeeper Marwin Hitz got enough on the shot to turn it on to the woodwork.

Dortmund then sparked their comeback as they equalised with a penalty in the 66th minute.

Pulisic's dart into the Liverpool box was halted illegally by a combination of Milner and Klavan and the United States international got up to fire the resulting spot-kick down the middle.

Joe Gomez headed straight at Hitz and Liverpool rued that wasted opportunity as Dortmund hit a late double to snatch all three points.

Marcel Schmelzer's low cross was emphatically finished by Pulisic to put Dortmund ahead and Lucien Favre's side completed a stunning comeback through Larsen's 93rd-minute goal, the teenager tucking in a rebound after Karius parried Pulisic's shot back into the danger zone.