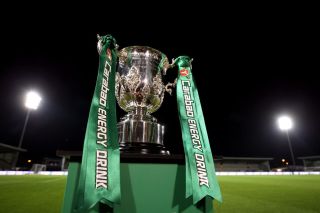 Liverpool have been drawn against Aston Villa in the Carabao Cup quarter-finals although a date for the fixture has yet to be agreed.

Jurgen Klopp suggested on Wednesday he could pull his side out of the competition if a date cannot be found for the quarter final, after the club reached the last eight via a penalty shoot-out following a 10-goal thriller against Arsenal.

As Champions League winners, Liverpool will be playing in the last four of the Club World Cup in Qatar on 18 December, with the Carabao Cup quarter-finals scheduled for the same week.

The English Football League released a statement in reply to the Liverpool manager’s comments, saying: “The EFL is in discussions with Liverpool to identify an alternative date given the club’s participation in the FIFA Club World Cup competition.”

Colchester have secured a lucrative trip to Manchester United, and the League Two club will be looking to cause further upset, having already knocked out top-division sides Tottenham and Crystal Palace in the competition’s earlier rounds.

Manchester City, in search of their third successive league cup trophy, will travel to Oxford, after easing past Southampton on Tuesday in the fourth round.

Leicester will travel to Everton, who have never won the competition, after a 3-1 win at Burton on Tuesday.

The quarter-finals, aside from the Liverpool fixture, are set to take place the week starting December 16.