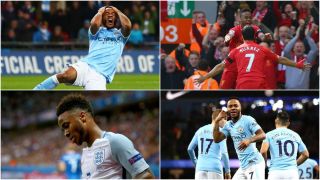 Raheem Sterling looked like he wanted the ground to swallow him up.

Manchester City took a 1-0 lead after half-time in the 2016 EFL Cup final at Wembley through Fernandinho. As Yaya Toure and David Silva surged at a porous Liverpool defence before the hour, Sterling had the chance to definitively silence his tormentors.

The England winger's £49million switch from Anfield to the Etihad Stadium in July 2015 had proved acrimonious. Fleetingly the teen darling of the Kop, Sterling was now Judas. Public enemy number one.

Jeers turned to guffaws as Jurgen Klopp's Reds thumped Manuel Pellegrini's City and Sterling 4-1 in the Premier League that November, but he moved to Manchester to win trophies. Now he could seal one, sweetly at Liverpool's expense.

Silva's ball across the box deflected, still falling favourably for Sterling. But he snatched a simple chance and skewed horribly wide. He lay momentarily face down on the turf before springing up and trotting back into position with a telling grimace.

Philippe Coutinho equalised before second-choice goalkeeper Willy Caballero was City's shoot-out hero. Sterling did not take a penalty. He had his trophy, but City had won despite and not because of him.

The teenager still had so much to do when he received Luis Suarez's pass on that sun-kissed Anfield afternoon. Vincent Kompany and Joe Hart were led a merry dance and Sterling slotted home, sparking pandemonium in the Kop.

The goal set in motion a stirring 3-2 win for Liverpool over Manchester City that seemingly placed one of Steven Gerrard's hands on the Premier League trophy. Ultimately, City would best Brendan Rodgers' swashbuckling side in the final week to be crowned 2013-14 champions.

It did little to temper Sterling's burgeoning reputation. His 11 goals in all competitions secured a starting berth for England at the 2014 World Cup, where he was a shining light of a forgettable campaign. A star had been born.

Didn't win league but my teams full of champions day memories May 11, 2014

Raheem Sterling looked like he wanted the ground to swallow him up.

His performance in England's opening 1-1 draw against Russia at the Euro 2016 drew a now grimly familiar stream of criticism. Sterling responded by dubbing himself #TheHatedOne in an Instagram post.

Early in the anticipated all-British showdown with Wales in Lens, Adam Lallana found space on the right – much like Silva at Wembley four months earlier.

Sterling darted towards the centre of the box but skewed a left-footed effort horribly over. There he was again. Face down on the turf, springing up, grimacing.

England beat Wales 2-1 but crashed out of the tournament against Iceland by the same scoreline. Sterling won an early penalty, converted by Wayne Rooney in Saint-Etienne, but was then subsumed within a performance that should only have existed in his and his team-mates' worst nightmares.

Part of a collective failure, Sterling – or "footie idiot Raheem" as one tabloid crassly labelled him – bore an unfair and torrid brunt of the fallout.

A week before that noise reached its baying crescendo the phone rang.

"As long as you work for me, I'll fight for you," incoming Manchester City manager Pep Guardiola told Sterling, who was dropped by England following his Wales nightmare.

It marked the start of one of the most enriching player-coach relationships of recent years. In Guardiola's first year at the helm, Sterling's form was City's in microcosm. Thrilling, brimming with potential but frustratingly inconsistent.

The jury remained out, with 10 goals and 21 assists across all competitions in 2016-17 not a handsome enough return to justify his price tag.

Still Guardiola cajoled, encouraged and praised. Sterling was working and the Catalan was fighting for him. Their efforts have paid dividends this season.

City have won 20 of 22 unbeaten games in the Premier League and qualified for the knockout stages of the Champions League as group winners. Sterling is their top scorer in both competitions, an indispensable part of Europe's most vibrant attack.

He is also City's clutch player, with stoppage-time winners against Bournemouth and Southampton not much later than late efforts to steal the points versus Huddersfield and Feyenoord.

On each of the 18 occasions he has found the net this season, the naysayers have dwindled. Those driven by understandable partisan pride at Anfield will boo him again when City visit Liverpool on Sunday. Others who jeered him at grounds across the country, spuriously informing a youthful footballer he had "let his country down", are no longer so visible.

Sterling has faced more vitriol than any 23-year-old pursuing the profession of his dreams should ever reasonably expect, even before we consider he was the victim of a racist attack in the hours before City played Tottenham last month.

This gifted, impressive young man simply got brilliantly on with his job. It was impossible to spot any adverse effects of the earlier ordeal when he scored twice in a 4-1 thumping of Spurs.

Perhaps the most telling part of those lowest moments at Wembley and Euro 2016 was how quickly Sterling picked himself up off the turf.

A turbulent, engrossing and – rarely through any fault of his own – sometimes regrettable early career journey, lands back on Merseyside once again this weekend.

Now, more than ever, Raheem Sterling looks like a champion in waiting.