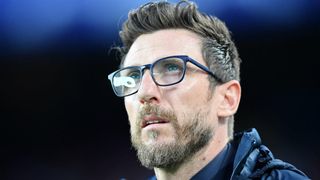 Eusebio Di Francesco has joined the chorus of voices calling for peace between fans when Roma host Liverpool in the Champions League on Wednesday.

The Italian club lost 5-2 in the first leg of the semi-finals at Anfield last week in a match that was overshadowed by issues outside the ground prior to kick-off.

Liverpool supporter Sean Cox, 53, was left in a critical condition after an incident that saw two Italian men charged and remanded in custody by Merseyside Police.

Roma president James Pallotta has since hit out at "f****** morons" tarnishing his club's reputation, while sporting director Monchi urged the Stadio Olimpico crowd to show they are "not violent" in the return fixture.

"Every fanbase has bad elements. It's always a minority of fans who do these awful things," Di Francesco told the media.

"We stand shoulder to shoulder with Sean Cox and his family and we are against any form of violence.

"There are true passionate and decent fans in Rome, but a tiny minority, the same in England and all over the world. These are the people who can ruin a brilliant sport, and brilliant game, that we will have tomorrow.

"I take this opportunity to make an appeal [against violence]. I hope tomorrow will be a celebration, regardless of the result."

Roma, who overcame a three-goal deficit on home soil to knock Barcelona out in the previous round, are attempting to reach the final of Europe's premier club competition for the first time since 1984.

Di Francesco: "We’re playing a Champions League semi-final in front of 70,000 people – you should expect to see a team ready to compete. I want to see an eagerness and desire from the players to overcome this challenge.”May 1, 2018