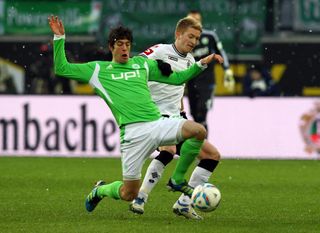 The 27-year-old suffered a Transient Ischemic Attack (TIA) while at home watching Brazil take on Netherlands in the World Cup but was initially unaware of what the problem was.

Lopes, who has been with the Bundesliga club since 2012, contacted Wolfsburg's physio Michele Putaro and he was able to alert an emergency physician before the player was admitted to a local hospital.

The former Nacional man is hopeful of returning to action, having revealed the initial symptoms of the problem.

"I felt dizzy and knew something wasn't right," he told Bild.

"One can perhaps say that Michele has saved my life. I had no idea what was wrong with me at the time but a few days later we knew then what was going on.

"I am certain that I will return to professional football."