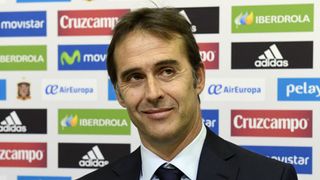 New Spain coach Julen Lopetegui concedes he would now be Wolves manager but for prolonged delays in the Chinese consortium completing their buyout of the Championship club.

Former Porto boss Lopetegui was installed as Vicente del Bosque successor this week, having previously overseen Spain teams from under-19 to under-21 level.

However, he was on the verge of joining Wolves, who belatedly confirmed a takeover from the Fosun International investment group on the same day as Lopetegui's Spain appointment was announced.

"I was waiting to hear about an agreement that I had in place about what was an incredibly attractive and exciting project at Wolves," the 49-year-old told Sky Sports.

"Certainly if the Spanish job hadn't come up, I know I would now be coach at Wolverhampton.

"We were looking forward to working with a great project, looking to build the future, but the truth is when your country calls you, obviously everything changes.

"I was very keen to come to England. There were so many positives. Wolves are a great, historic club, with fantastic fans, with an infrastructure to become [one] of the great clubs."

Lopetegui took time to pay tribute to Wolves manager Kenny Jackett, who was left in a frustrating state of limbo by the club's prolonged courtship of his Spanish counterpart.

"I know how difficult it can be to carry on as normal with all this going around and I want to put on record my maximum respect for him and all his staff throughout this whole situation," Lopetegui said.

"The timing was not down to me, and Mr Jackett behaved throughout it all in a magnificent exemplary manner."

Following three consecutive major tournament wins spanning 2008 to 2012, Spain were dumped out at the group stages of the 2014 World Cup before Italy eliminated them in the last 16 of Euro 2016.

Lopetegui believes it is time to refine the unmistakable and relentless passing style that inspired La Roja's glorious period of success.

"We need to know what our strengths are and where we need to get better," he added. "We know that our rivals have learnt how to counter Spain's domination of the game and now is the time for us to find an answer to the rivals we are facing.

"Effectively, it is to have a response to our opponents without losing our essence."