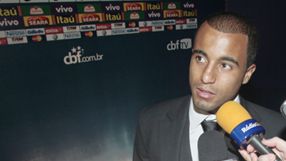 According to media reports Qatari-backed PSG paid a fee of €45 million for the exciting prospect in August, with an agreement that he would arrive in January.

The five-year deal was completed on Tuesday after Lucas, who helped his former club Sao Paulo to clinch the Copa Sudamericana last month, joined the Ligue 1 leaders at their training camp in Qatar.

"I will fight to fulfil this goal to become number one. It's the dream of all the Brazilian players so it's mine [too]," the 20-year-old told a news conference in Doha.

"I know Brazilian players have made history at this club and I hope I will do the same," added Lucas who has won 22 caps for his country and has likened his style to that of World Player of the Year Lionel Messi of Argentina.

PSG have a tradition of signing top-quality Brazilians, especially in the 1990s when playmaker Rai and centre-back Ricardo helped them clinch their last French title in 1994.

"I have talked to Rai who told me to focus on my game and learn French quickly," said Lucas.

PSG sports director Leonardo also spent a year as a player at the club before moving to AC Milan in 1997.

While Lucas is poised to be a regular starter, fellow Brazilian Nene is at odds with coach Carlo Ancelotti and is likely to leave the club.

"I am not going to stay at PSG. I have spoken to Leonardo - it's over for me," Nene told the daily newspaper L'Equipe.