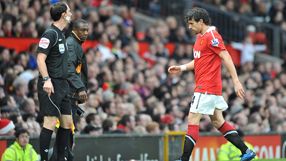 More than two years since his last start, in which time chronic tendinitis in his knees has cursed his career, he was recalled to face Wolverhampton Wanderers after illness swept the Old Trafford club but the 29-year-old's joy turned to despair.

United manager Sir Alex Ferguson described the latest setback as a disaster for a player who cost 17 million pounds from Bayern Munich in 2007 but has become the club's forgotten man.

With the league derby against Manchester City looming on Wednesday, United's injuries are piling up.

"We took a gamble with Owen Hargreaves," Ferguson said after Park Ji-sung's last-gasp goal gave United a 2-1 victory to cut Chelsea's lead at the top of the table to two points.

"We thought by doing that it would give us a compact midfield with experience. But he only lasted five minutes. It was a disaster. He has hurt his hamstring, which is unbelievable. It put us under the cosh."

United were without Dimitar Berbatov and Michael Carrick, both unwell, while Nani was injured and Wayne Rooney is heading to the United States to recuperate from his ankle injury.

"Patrice Evra, Paul Scholes and Nemanja Vidic were all feeling under the weather, then we had to bring Bebe on. He has potential but he is learning," Ferguson said.

"Nemanja in particular did well to play in that game, Patrice battled on and I was only going to use Paul if I needed to. I did need to and he did well."

It was the sight of Hargreaves pulling up lame that was the most depressing sight for Ferguson, however, after the Canadian-born midfielder had been given a rousing reception by the United fans before kickoff.

Defender John O'Shea said the injury to Hargreaves had taken the gloss off the victory.

"We feel so sorry for him," the Irishman told MUTV. "He was so looking forward to it and we were really excited for him as well after all the hard work he's put in.

"We just have to wait and see exactly what the injury is, but he'll be back again, no doubt about that."

The former England midfielder's career has stalled at United as he battles the knee problems that have required surgery in the United States.

Hargreaves last started a game in September 2008 against Chelsea and has since made just one brief appearances as a substitute at the end of last season.