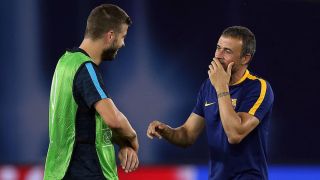 Luis Enrique is promising evolution rather than revolution with Spain - and hopes Gerard Pique will be part of the national team's future.

After a year-long sabbatical from coaching, the former Barcelona boss accepted the opportunity to take charge of La Roja following a disappointing World Cup campaign.

Spain's preparations were hampered by the departure of Julen Lopetegui on the eve of the tournament, with Fernando Hierro stepping into the job at short notice.

And the 2010 champions failed to find their best form in Russia, winning just once to qualify from Group B before surprisingly losing to the host nation on penalties in the last 16.

"The line between failure and success is really thin," Luis Enrique told the media at his official presentation on Thursday.

"I know that the past managers were very professional, and I thank them for their job and all the experienced people that they left here.

"Football is in continuous evolution, despite the fact that we had great teams there has been three tournaments without getting the trophy. That shows how hard it is, and the situation was similar when I arrived at Barcelona.

"The idea is to evolve, after this World Cup we need to make decisions. I have to get all the information I can to make those decisions.

"The generation of players is changing, we have to study every case individually and value what's best for the national team in order to be competitive in two years."

Luis Enrique will not be able to call upon Andres Iniesta, however, as the experienced midfielder announced his international retirement after the World Cup exit.

Media reports suggest Pique could also follow his former Barca team-mate's example, though the new boss is hopeful the centre-back will continue to make himself available for Spain.

"I didn't talk to any player yet but that doesn't mean I won't in the future," he said.

"I think we need to analyse every case individually, I would like to have every player possible available and Pique proved down the years that he is a great performer.

"We will study every case individually and talk to them, after that we will try to have the best possible players available, it's also obvious that we have to respect the feelings of every player...so we will value his case."

On Iniesta, who has joined Vissel Kobe, he added: "Andres has been like a little brother, when I've been a coach he has helped me.

"A new adventure begins for him. I would have loved to have the Iniesta of 25 or 26 years but you have to respect him."