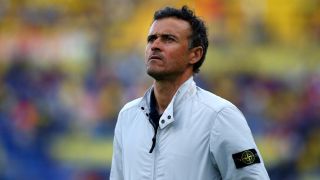 Madrid recorded a pivotal 4-1 home win over Sevilla, meaning they remain level on points with Barca – who won at Las Palmas by the same scoreline – with a game in hand.

Los Blancos will be crowned Spanish champions for the first time since 2012 if they pick up four points from their last two matches away to Celta Vigo and Malaga, although one defeat would put the title destiny back in the Catalans' hands.

And Luis Enrique thinks there is still plenty of life in the title race given his side lost at both Celta and Malaga earlier this season, meaning the same is possible or Madrid.

"They have two very difficult games against two teams, Celta and Malaga, who we have lost against this season," the Barca boss said to Movistar after the Las Palmas victory, secured courtesy of Neymar's hat-trick and a Luis Suarez strike.

"If we have lost there than anyone can lose there and I want to point out that we have lost in Vigo many times."

3 - Neymar has scored his first away hat-trick for Barcelona in all competitions. Samba. May 14, 2017

Luis Enrique also claimed his words had been spun after appearing to cast doubt on whether Malaga would fight hard to do Barca a favour if the race goes down to the final day, when his side will host Eibar.

"That is not true, words have been put in my mouth," he said after his comments prior to the Las Palmas game were put to him.

"I have never doubted anyone's professionalism. We just have to win next Sunday against Eibar at Camp Nou.

"We have one game left and clearly the objective is to win that game, to give us a chance to be champions."