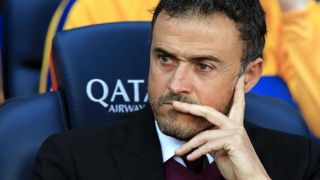 Messi is tipped to collect the coveted gong for a fifth time in his illustrious career at the gala in Zurich next week and he completed his latest Camp Nou hat-trick on Saturday as Barca made light work of their struggling visitors.

Having guided the club to five trophies in 2015, Luis Enrique is well placed to win the FIFA Coach of the Year award on the same evening.

But following news that predecessor Pep Guardiola and the Bayern Munich squad will not be in attendance, the current Barca boss confirmed he would also not spend time with his fellow footballing luminaries.

"I will not be at the Ballon d'Or gala," he told reporters at a post-match media conference, before turning his attention towards Messi's exceptional talents.

"Messi is a unique player and there won't be another one like him.

"I like Roberto's approach in midfield, playing with few touches and an ability to get us between the lines," he said.

"He also has good defensive work. Midfield could be the ideal position for him but he has strong competition.

"He will be a vital player for Barcelona."

On Turan, who crossed for Messi's opener and had a hand in the third goal, Luis Enrique added: "I saw Arda play very well.

"It is different when you play in Barcelona and have to adapt to your team-mates. I am very happy with the performance."