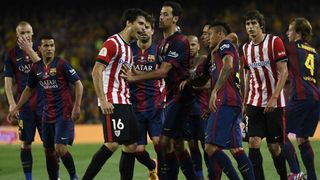 Luis Enrique has warned Athletic Bilbao that alleging disrespect if they are beaten by Neymar's tricks will not wash with the referee in Sunday's Liga clash at Camp Nou.

Neymar's attempt to flick the ball over Unai Bustinza's head in the closing stages of the 2014-15 Copa del Rey final, which Barca won 3-1, was met with a heated response from Ernesto Valverde's players.

Luis Enrique insisted that accusations of unnecessary showboating are not an acceptable reason to target the Brazilian, suggesting the referee will be quick to punish any offenders.

"I'm going to give him advice that he should continue enjoying football," the Barca coach said.

"He's not doing anything offensive, it's his way of playing and people can no longer use being chipped or getting nutmegged by Ney as an excuse.

"There's no disrespect. If there's an opponent who doesn't understand that then there's a referee who can send him off."

This week, Real Madrid and Atletico Madrid were banned from registering new players in the next two transfer windows for breaches "relating to the international transfer and registration of players under the age of 18".

Despite only this month emerging from a similar punishment, the Barca coach had no advice to offer to his club's rivals.

"I have the same opinion that I had about our own sanction. But I don't remember it, so you'll have to pull it out of the archives," added Luis Enrique.

"I don't know - there's not only one single key [to getting through the ban]. It's so complex and there are so many factors that you cannot say."

On Saturday, Barca confirmed Jeremy Mathieu is suffering from a calf injury, but Luis Enrique added it would not be a long-term issue.

"Mathieu just had some post-match discomfort, he should be ready for the Copa," he said.