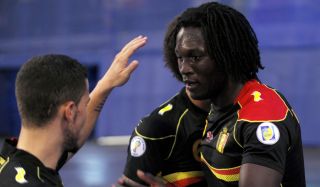 The 20-year-old - who joined Roberto Martinez's side on loan from Chelsea in September - notched a first-half brace against Croatia in Zagreb on Friday as Marc Wilmots' side earned a 2-1 success.

That result ensured Belgium continued their undefeated record in Group A and means they have an unassailable seven-point lead over Igor Stimac's men at the top of Group A, with one game to play.

But Lukaku refused to take full credit for the victory, and was glowing in his praise for his team-mates.

Speaking to De Gazet van Anterpen, he said: "I still say the team made the difference, I just did a little extra.

"Look at how much work (Axel) Witsel, (Steven) Defour and (Marouane) Fellaini did in midfield on Friday. How many metres (Eden) Hazard and (Kevin) De Bruyne ran for me, and how the defence was strong on the day.

Lukaku also revealed how Martinez had contacted him following the game to praise his improvement, but he is itching to do even better.

He added: "Roberto Martinez, my coach at Everton, even called me and said I am doing well in my development.

"Though personally I think I have much margin to progress this season.

"I can be even better, the road is long. I really want to reach my maximum."

Belgium finish their qualifying campaign when they host Wales on Tuesday.