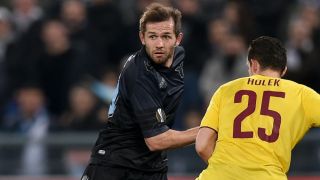 Senad Lulic insists Lazio should be ashamed of themselves after crashing out of the Europa League with a 3-0 home defeat to Sparta Prague in the last 16 on Thursday.

Having drawn 1-1 in the first leg in Prague, Lazio were eliminated from the competition as Sparta went 2-0 ahead inside the first 12 minutes at the Stadio Olimpico thanks to goals from Borek Dockal and Ladislav Krejci, Lukas Julis adding a third.

Lazio never looked like pulling off a remarkable turnaround, Sparta easily seeing the game out for a 4-1 aggregate win.

The defeat ended Lazio's last hope at silverware this season and midfielder Lulic told Lazio Style Channel: "I really don't know what to say. We really wanted to progress in this competition. We got everything wrong.

"Being 3-0 down at half-time is inexplicable and we cannot accept that. We should be ashamed of this result. The Europa League was our only remaining objective.

"Going out like this, losing at home to Sparta Prague, cannot be explained. We just have to be embarrassed with ourselves.

"Nothing went right, in defence or attack. We conceded three goals and didn't even score one. We had the chances, but didn't convert them.

"I don't know if it was psychological, perhaps after the first leg we thought it would be easy. We thought about the quarter-finals before getting through the round of 16. We cannot go out there with that attitude."

"We made too many mistakes and you cannot be two goals down after 12 minutes. It makes it an uphill struggle. That start decided everything and it's a great shame.

"Unfortunately this is not the first time we have started with a handicap. We are working on it, but clearly so far have been unable to fix the issue.

"In a negative campaign like this, going down early against a strong opponent makes everything far more difficult.

"There is disappointment, we wanted to progress, but we got the approach wrong. Unfortunately this is the truth, we make early mistakes that then complicate things."