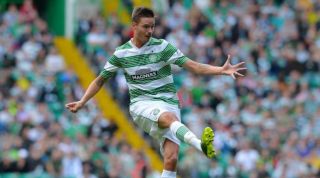 The Swede, who moved to the club in 2012, signed a new three-year deal in May and is relishing the prospect of working under new manager Ronny Deila.

Wanyama and Hooper both left for the Premier League last year and, while Lustig could see their reasoning, he is happy where he is.

"I can only speak for myself. The Premier League is probably the biggest in the world and I cannot blame them for making that decision, but I look at the whole picture," Lustig told The Scotsman.

"Why not sign a new contract with a club that I am happy with in a city which my family and I are happy with? It was not a hard decision for me to stay here.

"I love playing for my country as well and you never know what can happen when you change club. Norwich went down, but it was always a dream for Gary to play in the Premier League and he has done it now. Victor did well in Southampton, too. In my case, I feel I have done the right thing.

"To be able to play in a really big club and win titles as well as playing in Europe every year (makes me happy here).

"It is really hard to go to a bigger club than Celtic for me. Of course, if you are one of the best players in the world, you can maybe pick and choose. However, I feel that I would go to a smaller club if I was to make a change."

Celtic won the Scottish Premiership title by 30 points last season, losing just once in the league.