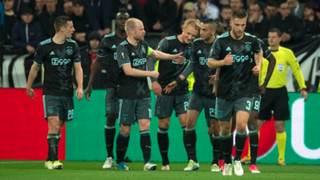 Kasper Dolberg's exquisite goal proved vital as 10-man Ajax clung on seal their place in the Europa League final despite a 3-1 defeat to Lyon, who saw their dramatic attempt at comeback fall short.

Ajax, winners of the UEFA Cup in 1992, held a 4-1 lead from the first leg in Amsterdam, and Dolberg's sixth Europa League goal of the campaign - a subtle dink over Anthony Lopes - furthered their advantage 27 minutes into a thrilling contest.

However, naive defending from Peter Bosz's young side allowed Lyon back into the tie - Alexandre Lacazette netting twice in the space of 76 seconds on the stroke of half time.

Ajax substitute Donny van de Beek went agonisingly close to putting the tie to bed in the second half when he rattled the woodwork, before Rachid Ghezzal moved Lyon within a goal of forcing extra time, his header from Maciej Rybus' looping cross deflecting in off Nick Viergever.

Matters were made worse for Viergever when he picked up a second yellow card moments later, but the undermanned visitors clung on for a 5-4 aggregate triumph amid sustained late pressure from Lyon to set up a final against Manchester United on May 24.

6 - Kasper Dolberg now has the joint-most goals as a teenager in the Europa League (6, with Iker Muniain). Sensation.May 11, 2017

Having weathered an early Lyon storm, Ajax had the better of the opening stages - Amin Younes and Hakim Ziyech both failing to make the most of gilt-edged chances.

But the visitors did not have to wait too long to take the lead.

Quick-thinking from Andre Onana freed up Younes to play in Dolberg who - after timing his run to perfection - lofted a sublime finish over the onrushing Lopes.

A dejected Lyon were handed a lifeline just prior to the interval, though - Lacazette thumping home from the penalty spot after going down under pressure from Matthijs De Ligt.

That goal sparked Lyon into life, and they had their second a minute later when Lacazette steered in Nabil Fekir's cross-cum-shot to complete the turnaround.

Ajax's youthful defence was carved open again after the restart, but Mouctar Diakhaby could not apply the finish after connecting with Mathieu Valbuena's free-kick.

8 - are one of only eight teams to appear in ten UEFA European club competition finals. Godlike. May 11, 2017

Fekir should have turned from provider to goalscorer with 25 minutes remaining, yet Ajax escaped unscathed as the forward skewed over from close-range.

Van de Beek was a whisker away from settling the tie with a blistering strike that struck the upright - and Lyon had a third moments later.

Ghezzal's header deflected in wickedly off the unfortunate Viergever, who received his marching orders soon after for a late lunge on Rybus.

But for all their dominance, Lyon could not make the numerical advantage count - Lacazette and Maxwel Cornet both going close as Ajax stood firm to claim a place in a European final for the first time since 1996.