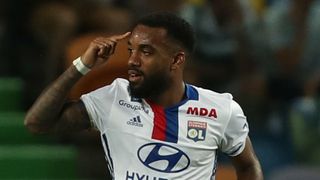 Lyon are ready to cash in on Alexandre Lacazette at the end of the season if the right club comes along and is willing to match their demands, according to chairman Jean-Michel Aulas.

The 25-year-old has been in sublime form this campaign, netting 26 times in 29 Ligue 1 appearances, and his good performances have not gone unnoticed elsewhere.

Cliubs such as Arsenal, Borussia Dortmund and Atletico Madrid have all been credited with an interest in signing the prolific attacker and Lyon are now open to a transfer, having rejected offers for their star attacker last year.

"If the club of Alex's heart is capable of matching our demands, like Barcelona with Samuel Umtiti last year, then things will go well," Aulas said at a news conference.

"Otherwise, it also depends on any other outgoing transfers.

"If other players feel Lyon are not big enough for them, we will look for players who are equally strong and have the right mindset.

"We will not remain inactive on the transfer market. If some players leave, we will re-invest that money in the squad."