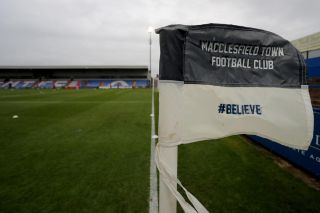 Macclesfield’s problems continue to mount up after they were charged with misconduct over the non-payment of players.

The EFL has announced that the League Two club have now been referred to a disciplinary commission, which has the power to impose “a full range of sanctions” if the club are found guilty of misconduct.

A league statement released on Thursday afternoon read: “The EFL recognises the impact the non-payment of wages has on the health and well-being of those involved and has been engaged in discussions with Macclesfield Town and the Professional Footballers’ Association (PFA) to try and find an appropriate solution.

“The club was given until 4pm yesterday to provide a response to the EFL’s request for information in this respect.

“As a result of the information provided, the EFL has notified the club of multiple charges related to failing to adhere to the terms of the contracts that are in operation.”

The Cheshire club have been charged under section 63.7 of the EFL’s rules, which states that the terms of a standard contract between a club and a player shall be strictly adhered to.

The disciplinary commission has a range of sanctions available to it, which can start at a reprimand or warning up to sporting penalties such as docking points.

👏🏼 Well done to all the players today, especially those who made their professional debut’s. A young group of students who acquitted themselves brilliantly on one of the biggest of stages. pic.twitter.com/4jMJVEcoIa— Macclesfield Town (@thesilkmen) November 10, 2019

The EFL said on Tuesday that wages from July to September had been paid from solidarity and basic award payments.

In Thursday’s statement, the EFL said a further £30,000 had been released after the club fulfilled their EFL Trophy fixture on Wednesday night.

Concerns are growing that Macclesfield may suffer the same fate as Bury, who were expelled from the league in August after failing to provide guarantees of financial sustainability.

The club fielded six youth team players and five loanees in their FA Cup first-round defeat to seventh-tier Kingstonian at the weekend.

BBC Radio Manchester has reported that local businessman Joe Sealey has made an offer to buy the club.