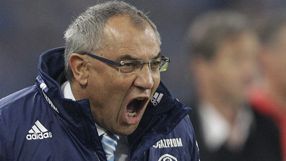 Schalke were Bundesliga runners-up last season and then spent millions of euros in the transfer window to try to help implement Magath's plan of winning the championship by 2013.

However they have plunged to second from bottom, with the same six points from 10 games as basement club Borussia Moenchengladbach.

"No doubt this is the most difficult point in my career," said Magath ahead of Friday's home game with 13th-placed St Pauli. "We are not battling hard enough.

"These players are not used to fighting to avoid relegation. "This is new to them."

Former Spain striker Raul has won domestic titles at home, Champions League crowns and scored a record 68 goals in Europe's elite club competition in a career where relegation has never been an issue.

In his first season at Schalke though, Raul finds himself battling to avoid the drop.

Schalke have not won the league for more than 50 years but have been title contenders throughout the past decade.

"It is November now and I am quickly running out of advice," said former Germany defender Metzelder who joined the club from Real Madrid in the close season.

On Saturday second-placed Mainz can go top with a win at Freiburg while Hoffenheim, in third, travel to Hamburg SV and Moenchengladbach entertain Bayern.

Leaders Borussia Dortmund visit Hanover 96 on Sunday, the same day as fourth-placed Bayer Leverkusen are at home to Kaiserslautern.