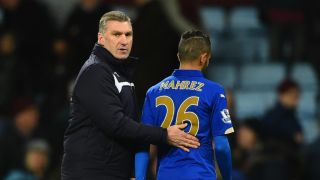 Riyad Mahrez has set the Premier League alight under Leicester City manager Claudio Ranieri, but the Algerian believes his predecessor deserves credit for the club's table-topping position as well.

Mahrez has 14 goals in 24 Premier League appearances this season and his stellar form has helped propel Leicester to the top of the Premier League pile.

But Mahrez said the club had to be thankful to Nigel Pearson, who was sacked as Leicester coach during the off-season, for keeping the team in the Premier League.

Pearson also signed Mahrez and Jamie Vardy - the Premier League's leading scorer - and earned the club promotion from the Championship.

"Nigel was very good with me," Mahrez said.

"He knew I didn’t speak much English when I arrived, so he spoke more slowly to me and he tried to teach me good things as well.

"It was difficult in the beginning but now it’s OK. Does he deserve credit for where we are now? I think so, yeah.

"He brought all the players to the team, apart from maybe a few. Even if we finish sixth or seventh now, he deserves credit because he built this team.

"He didn’t have the luck to carry on."

Mahrez said he was happy with life under Ranieri, adding: "He always wants to compete near the top – that shows he’s someone who deserved to be working here at this level.

"I think he’s taken all the best things from his experience of working with lots of different players, and has brought out the best in each of us.

"Usually he will tell me the good things I’ve done, or that I did a good job for the team, but sometimes he will start with the bad things – even if I have scored.

"He might say I was good with the ball offensively but I needed to work more on the defensive side, and you always know he is there on the touchline."