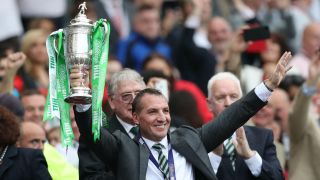 Brendan Rodgers says Celtic have created an "identity" after Tom Rogic's stunning goal earned them a last-gasp 2-1 win against Aberdeen in the Scottish Cup final to secure an unbeaten domestic treble.

In the closing stages of what was a thrilling contest at Hampden Park, Rogic powered into Aberdeen's area to dispatch a superb finish past the outstanding Joe Lewis to send the Celtic fans into delirium - just two days after the 50th anniversary of the club's European Cup triumph in Lisbon.

It represents Celtic's first treble since 2001, and Rodgers - who has restored his reputation at Celtic after a disappointing end to his time at Liverpool - was quick to laud his history-making side.

"It's an incredible feeling. It was a very tough game but if you want to make history it never comes easy - you have to suffer," he told Sky Sports.

"This might be a once-in-a-lifetime achievement. To go through a league season unbeaten, to win a treble. But we've created an identity, and from that we can get better."

Aberdeen had the better of proceedings in the first half, though Stuart Armstrong's equaliser quickly cancelled out Jonny Hayes' early opener.

Celtic dominated after the restart, but failed to make their possession pay until the 92nd minute, when Rogic's moment of magic claimed the win.

"Give credit to all of the Celtic and Aberdeen players, but as the game wore on our quality and movement paid dividends," Rodgers continued.

"We left it late but we did have two or three really good opportunities that we should have taken before that.

"The first half wasn't so good. We weren't fluid, and maybe a bit nervous. But we stayed calm and hopefully over time they would start to tire and that's what happened."

Meanwhile, Celtic captain Scott Brown paid tribute to Rodgers, acknowledging that Aberdeen - who finished as runners-up in both the Scottish Premiership and League Cup - provided the toughest challenge of the season.

"We know that when we turn up we're the best team in Scotland, but Aberdeen gave us a great game today.

"This is the best feeling ever. From this team, nobody was expecting it. At the start of the season the gaffer has come in and changed the philosophy. We deserve this."