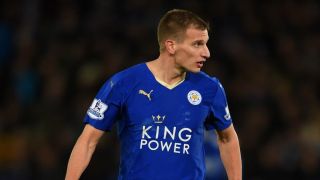 Leicester City winger Marc Albrighton believes his team-mates will respond in the right manner against Manchester City on Tuesday.

Claudio Ranieri's men suffered a rare loss at the hands of Liverpool on Boxing Day and will not find it any easier against City, but Albrighton has backed his side to put in a good performance.

"No-one likes losing, we showed that from the end of last season and we will fight to the end," Albrighton told Sky Sports.

"We always believe we can win every game and that's not going to change because we got beaten. The manager said to us to keep going and we have a great team and squad.

"City are a great team, the players they have got are world class but there's nothing better than to come up against some of their players at home after a defeat. We'll react in the right way.

"I know the kind of players we have in our dressing room. I'm pretty sure the fans will see us from the whistle on Tuesday getting straight into them."

With the race against relegation well behind them, Albrighton said there was no pressure on Leicester, but insisted that would not mean a relaxed approach.

"To be honest, I don't think we will play another game this season with pressure," Albrighton added.

"We've got ourselves in a brilliant situation and we are doing fantastic. Everyone was tipping us to be down there at the start of the season, but we're right in the mix and we deserve to be where we are.

"There will probably be a lot of pundits and media that might think now we are going to lie down and relax with our 30-something points.

"We're not a side to do that. We've got Manchester City on Tuesday and we look forward to bouncing back against them."